Invitation to March for Immigration

We write to inform you about a march for immigration reform occurring in New Haven on May 1st, the International Day of the Worker. We invite you to join hands with thousands of other demonstrators to make our voices heard. The march will begin at 10 AM from Front Street and Grand Avenue and proceed down Grand Avenue until to the Federal Building plaza behind city hall. Buses will be provided to transport students and New Haven members to the start site. Congresswoman Delauro will be present at the march and will be accompanied by other speakers who will address the urgent need for Comprehensive Immigration Reform.
The time for change is now. With a sympathetic president and a liberal congress the possibilities for humane comprehensive reform can and must become a reality. On March 19, Congressmen Charles E. Schumer and Lindsey O. Graham issued an op-ed in The Washington Post declaring their intent to publish a bill that would address many of the problems inherint in the current US immigration policy. With a sympathetic president, democratically controlled congress, and a bipartisan effort to draft this bill, prospect for humane and comprehensive reform has not been this strong since the 2007 Kennedy-McCain bill. In 2009, over two hundred deaths occurred in Arizona alone as immigrants tried to cross the border (for more information click here). The system as it stands today is broken.
The recent passing of Arizona's controversial immigration bill (SB 1070) should serve to awaken us all to the oppression and racism inherent in our current system of immigration enforcement. Expanding on already vicious programs like 287 (g), SB 1070 does nothing to protect us; it only creates the equivalent of a police state for anyone who does not fit perfectly into officers' image of an "American citizen." We can no longer stand by as criminals like Sheriff Joe Arpaio continue to violate the basic rights of human beings and even wield influence over legislation.
For the sake of our communities, we can wait no longer. Accordingly, MEChA de Yale hopes you will join us as we march with in unity down the streets of New Haven to demand that Obama fulfill his promise and make Comprehensive Immigration Reform a reality. We truly hope to share in this experience with you.
Thank you,
MEChA de Yale
First they came for the communists, and I did not speak out - because I was not a communist; Then they came for the socialists, and I did not speak out - because I was not a socialist; Then they came for the trade unionists, and I did not speak out - because I was not a trade unionist; Then they came for the Jews, and I did not speak out - because I was not a Jew; Then they came for me - and there was no one left to speak out for me.
--Veni Markovski 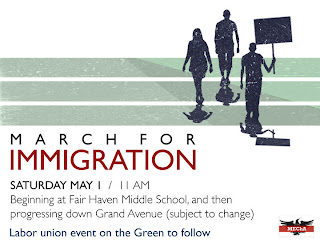